You are at:Home»Current in Carmel»Carmel Cover Stories»The great grain debate

Should the city’s grain elevator be restored or demolished in favor of redevelopment? 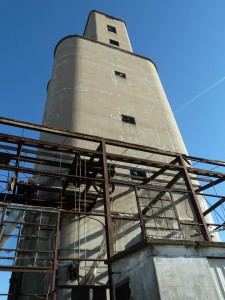 All signs point to Carmel’s grain elevator being torn down, with demolition beginning within a month – if not a matter of days.

Is Carmel’s grain elevator an eyesore or a historical landmark? A group of Carmel residents claims the answer to that question is the latter, but the Carmel Redevelopment Commission has already entered into a contract for the demolition of the structure near the Monon Greenway, just south of Second Street SW.

Demolition would clear space to be usedin a planned Midtown redevelopment in the area, but some Carmel residents are saying the grain elevator, approximately one century old, should be in the city’s long-term plans.

At the least, these residents want the city to accept a third party’s offer to, on its own dime, look into restoring and repurposing the structure; however, some city officials say that would create an unnecessary expense and delay.

Indiana Landmarks President Marsh Davis has offered to provide the city with a “modest grant to study the feasibility of retaining and adapting” the grain elevator to a new purpose.

“I know we have differing opinions on the historic and architectural merits of grain elevators, but since the issue has been raised within the community, Indiana Landmarks would welcome the opportunity to participate in a dialogue regarding demolition and alternatives,” Davis told Mayor Jim Brainard in a March 19 e-mail.

Residents Ron Kern and Kiel Kinnaman are among the ones in the community leading the charge to save the structure, including frequently updating and posting to a “Save the Carmel Grain Elevator” Facebook page, which, as of press time, had about 70 “likes” on the social media site.

“If it (Indiana Landmarks) is willing to spend its own money on this, if it thinks it’s that important, shouldn’t we stop and take a look at it (grain elevator)?” Kern asked. “This is the largest historical asset Carmel has.”

The grain elevator was once a significant driver of economic development to Carmel, and it is one of the few remaining signs of the community’s agricultural history.

But Brainard said he does not plan to accept the grant offer for a number of reasons, including the high cost and rather underwhelming benefit of reusing the structure.

Brainard, who studied history at Butler University, said he originally leaned toward keeping the structure and challenged the staff of the CRC to come up with new uses for the grain elevator. None of the ones proposed, he said, justified the costs involved, which he said were estimated by architect and CRC Director Les Olds. Some of these suggested uses mirrored those pitched by the community, including an observation tower, Brainard said.

“To clean that up and make it accessible with the Americans with Disabilities Act, we’re talking millions of dollars,” Brainard said. “In addition to that, you lose the redevelopment potential for that site, which is additional millions of dollars over time.”

Additionally, Brainard contended the elevator is not as historically significant as it is portrayed to be.

“It’s not unique. There are hundreds of these things still being used today,” he said. “And did something significant happen there? No. If the Declaration of Independence was signed there, that would be a different story.”

Kern said he wouldn’t be involved in this cause if not for a number of people with knowledge on architecture and grain elevators telling him the structure is unique and significant.One of the primary questions he and Kinnaman raise is, “What’s the hurry?” Midtown plans, as they point out and Brainard confirmed, are not set in stone, and financial reports indicate the CRC does not have the funds to move forward with new projects in the near future.

However, Brainard said there are reasons to complete the demolition as soon as possible. In a December CRC meeting, Olds said he anticipated the costs of demolishing the structure could be as much as $500,000, yet the commission accepted a bid much less than $200,000. In that meeting, Olds said delaying the work could only increase the price. Secondly, Brainard said it is likely another party – not the CRC – will purchase and develop the land, which he said could generate additional revenue for the city.

Ultimately, Kern and Kinnaman said they’re only asking for the city to accept Indiana Landmarks’ offer and allow another party to review the situation. The two said they would be satisfied and accept the outcome if Indiana Landmarks studied the structure and determined repurposing it to be too costly or otherwise impractical.

“We’re asking for a second-party opinion,” Kinnaman said. “We’re doing our due diligence before it comes down.”

Brainard said he appreciates these residents’ passion for protecting the structure, but added the city has been studying the possibilities for some time, and with the site now prepared for demolition work, an additional study is not a wise choice of time or money, he said.

“I don’t want to waste Indiana Landmarks’ money,” Brainard said. “We’ve already had smart architects look at this. I don’t see how they could come up with a different answer.”

Be part of the discussion on the grain elevator and find more photos at www.facebook.com/CarmelGrainElevator.