You are at:Home»Current in Carmel»Carmel Community»Moore talks IU hoops, future 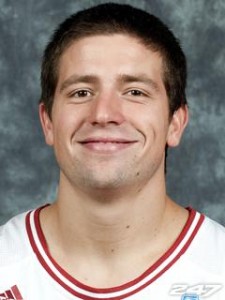 Former Carmel High School Greyhound Daniel Moore is nearing the end of his basketball career at Indiana University. Last week, Current caught up with Moore for a brief discussion about his time with the prestigious college basketball program, his post-graduation plans and more.

Moore said his family is still in Carmel and he regularly checks in on CHS’ sports teams, especially the boys basketball team during its recent run. “I played with a bunch of those guys during the summer while I was home, so I know some of them,” Moore said.

Moore is on scholarship in Bloomington this year, but he spent his first three years on the team as a walk-on. Coming out of high school in 2008, however, Moore turned down a scholarship from Boston University in order to join the Hoosiers. “It’s always been my dream to play at IU,” he said. “While Boston was a great opportunity, I had to follow my dream.”

After winning no more than 12 games in each of the past three seasons, the Hoosiers have become relevant again in college basketball. But even during the lean years, Moore never questioned his decision to play there, he said.

“It’s been a great rebuilding process coming from where we were our freshman year to where we are now. But it’s been up and down,” he said. “We had some tough times, but it’s always been the place where I wanted to be.”

As for his favorite moment wearing cream and crimson, that was the team’s December buzzer-beater to knock off top-ranked rival Kentucky at Assembly Hall, the highlights of which are now used in ESPN commercials. “It was crazy,” Moore said of the court-rushing scene following Christian Watford’s game-winning shot. “There was so much excitement.”

When tournament play begins, Moore said the Hoosiers’ success will depend on their defense and rebounding. “If we’re defending and rebounding, we’re a pretty tough team to beat.”

Moore has played his last game at Assembly Hall, and his college basketball career is coming to a close. After graduating in May, the sports communications major said he hopes to find a job in medical sales and doesn’t know where his job search will take him. Looking back on his time at IU, however, Moore said he’s happy about the way it’s ending.

“I’m going to miss it a little, but it’s going to be a good close to the last four years,” he said.