You are at:Home»Current in Carmel»Carmel Community»Whale of a Sale grows from humble beginnings 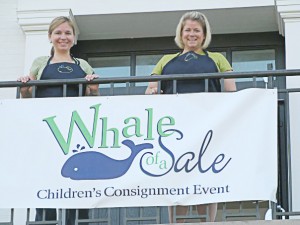 Carmel residents Courtney O’Neil and Jennifer Hare founded Whale of a Sale a little more than three years ago after realizing how quickly their own children outgrew expensive toys and clothing. Since then, the business has grown exponentially and has the two working full time.

The duo’s first semiannual consignment sale was held in the clubhouse of the Village of West Clay and featured the gently-used goods of about 95 consigners. Their sixth upscale event, to be held later this month, will have more than four times that many consigners whose children’s toys and clothing will fill a 25,000-square-foot retail space.

“We already have about 400 consigners registered,” O’Neil said last week. “We’ll also have about 30 vendors.”

The company continues to increase the number of items offered in each of its sales, and top-selling items include bikes, strollers, play kitchens, swings and toys, all of which families can purchase in “like new” condition at a fraction of retail cost. 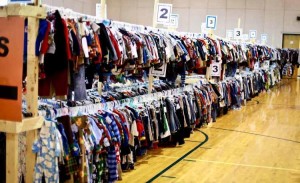 Major consignment events are held in the fall and spring of each year, and beginning March 15, the company will do so in a new Carmel location: the old Godby Home Furnishings store in Meridian Village Plaza. O’Neil said the company eventually outgrew its previous location at Eagle Church in Zionsville.

“It was a great location for us,” she said. “There’s a huge gym we would lease from them, but we just couldn’t get enough time in the calendar.”

Until space is full, consigners can sign up on the company’s Web site and list and price their own items. Though event volunteers can take home as much as 75 percent of their sales, most consigners take 60 percent, but the average seller walks out with a check of more than $272, O’Neil said.

“We don’t have overhead, so we’re able to pay our consigners a lot more,” she said.

O’Neil and Hare are sorority sisters from Butler University, and O’Neil said the two used their experiences, motherhood and marketing to develop the business plan. Each event now takes months to prepare, and O’Neil said she and Hare anticipate thousands of shoppers from the Indianapolis area to attend the next event, March 15-17.

“We just saw a great need for something like this in the community,” O’Neil said.

The upcoming sale will focus on upscale spring and summer clothing from newborn to size 12. For more information, visit www.whale-sale.com.