You are at:Home»Lifestyle»Blueprint For Improvement»Removal of wall allows new kitchen configuration

Original kitchen:This home located in the Foster Grove subdivision on the east side of Carmel was built in the mid-1980s. The owners had been thinking about remodeling the home for approximately 10 years, trying to decide if they were going to stay in the house or move.  They ultimately decided they really liked their neighborhood and the improvements they already made to the exterior, so they chose to stay. 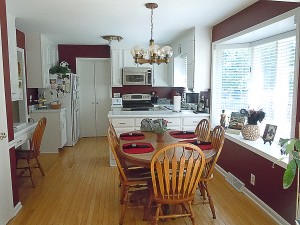 Kitchen design choices:When thinking about making changes to their kitchen, the owners were unsure if they wanted to keep the same footprint and make cosmetic upgrades, or go for a full-space remodel. The design team presented both options to them, and after seeing, for just slightly more money, they could greatly improve the overall flow, they opted for the reconfiguration option. The old kitchen was expanded, the old living room is the new dining room and the old dining room was used for kitchen expansion.The homeowner commented, “Seeing the computer drawings – comparing keeping the same footprint to completely changing the kitchen – helped us decide which option to choose. The designer showed us how, for just a little more money, we could get a bigger bang for our buck.”

Final result:The homeowner is thrilled with the result and stated, “We are very happy we made the decision to go with the new configuration. The old kitchen was small, and the new one has made our house completely different. We now have room to entertain. The new design opened up the space, so now we have room to maneuver around, cook and entertain. The kids like using the island for hanging out and snacks, so the new kitchen has brought the family back into the kitchen again. My favorite parts of the new kitchen are the expanded space, the newer appliances and the granite. The new lighting has made a big difference, too, adding a modern look and brightness.”