You are at:Home»Current in Carmel»Carmel Community»Carmel singer looks ahead after work with Madonna 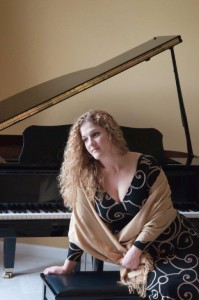 Carmel resident Dana Goot shared the stage with Madonna Feb. 5, and now she’s looking to build upon the once-in-a-lifetime opportunity.

Goot was in the choir that performed “Like a Prayer” with Madonna during the Super Bowl XLVI halftime show. Artistically, she said it was her “least challenging” gig to date, but she said she’s hopeful the exposure will help give her young career some additional momentum.

“People recognize it. This is someone singing for someone they know of who is world-renowned,” she said. “It gives you a lot of credit with people. And not everyone has sung backup for Madonna.”

Challenging or not, simply participating in the Super Bowl performance is a notable achievement for Goot, who only five years ago, began taking vocal lessons before deciding to change her career path and pursue music. Since then, she has performed locally at The Penrod Arts Fair and with the Indianapolis Symphonic Choir, and as far away as Israel, where she performed solo.

Because she specializes in jazz and classical music, Goot said she was pleasantly surprised to learn the song she would be singing during the Super Bowl. She knew very little about the gig when she applied, and it wasn’t until after she was selected that she learned of Madonna’s involvement.

“We were not permitted to even tell people we were in it,” she said.

Rehearsal locations changed daily, and Goot said they were “amazing.”

“No one practiced the middle finger, though,” she said, referring to M.I.A.’s gesture that aired uncensored. “I’m sure she (Madonna) wasn’t happy about that.”

Goot said there are many talented singers who, like her, are pursuing dreams of performing professionally full time. Those who get noticed can make it, she said, andperforming on the world’s biggest stage is perhaps the best way to accomplish that.

“Whenever I decide I’m going to do something, I do it,” she said. “Each experience has led me to another one, and that’s given me confidence.”