You are at:Home»Current in Fishers»HSE’s Harris named 2012 All American 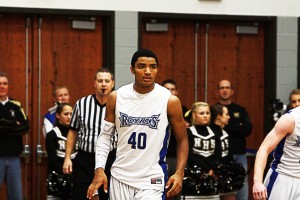 Harris, one of nearly 600 high school seniors nominated for the team, will join a total of 24 boys and 24 girls from around the country selected to play.

“This has been a really good year for me,” Harris said prior to the announcement. “From the way I’ve been playing lately, and the way I’ve played previously, I think I have a really good chance of making it. We’ve been winning games, so I’m trying to end my senior year on a good note.”

The players were nominated by high school coaches, athletic directors, school principals and members of the McDonald’s All American Selection Committee.

“It’s such an honor to be able to play and be a part of that game. I just want to experience it,” Harris said. “Ever since I started basketball, it’s been one of my goals.”

Harris, who has been playing basketball since he was 3, earned the title of top shooting guard in the nation from ESPNU this year, a TV channel that specializes in college sports. His team is ranked first in the state and 31st in the country. Despite the pressure to stay on top, Harris credits his parents with helping him make decisions throughout his senior year.

“Both of my parents have been there for me. My mom played college basketball and played in the WNBA, so she’s been through all the stuff I’ve been going through,” Harris said. “It’s been really good to have someone there to reassure me and just help me out when I’m struggling.”

Harris looks forward to competing with the best basketball players from around the country, possibly even some future NBA greats. Several esteemed basketball players began as All American athletes, including Kevin Garnett, LeBron James and Carmelo Anthony.

The All American Game will broadcast live on ESPN on March 28 at 7 p.m. in the United Center in Chicago. Ticket sales will benefit Ronald McDonald House Charities of Chicagoland & Northwest Indiana.