You are at:Home»Current in Fishers»Home court advantage

Harlem Globetrotters guard Dizzy Grant talks about playing for the most famous team in basketball, and why he made Fishers his home 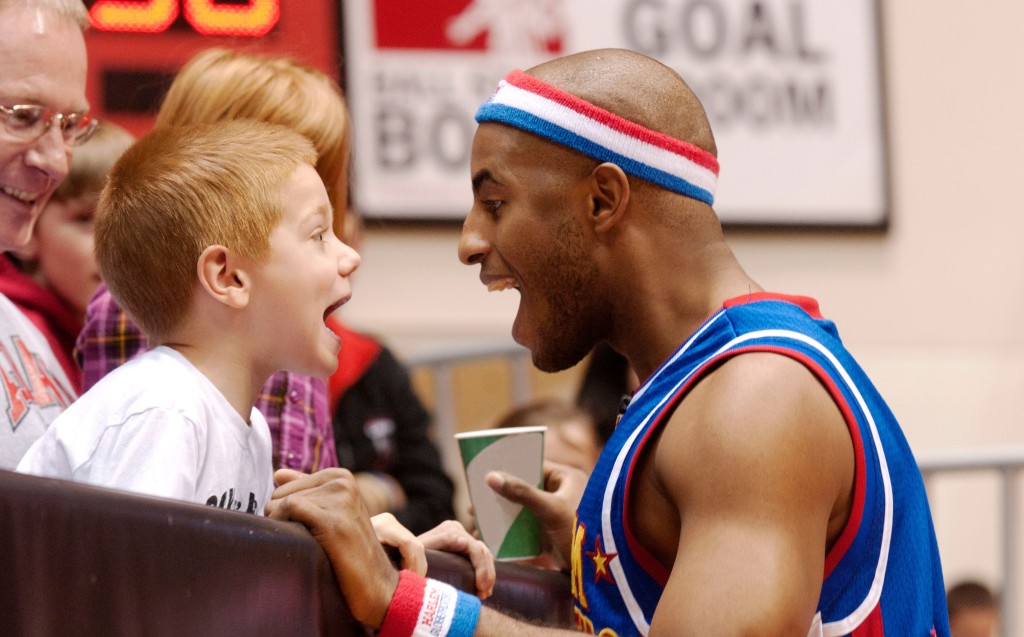 Harlem Globetrotters guard Dizzy Grant might play in courts around the world, but he calls Fishers home.

The 29-year-old Princeton, N.J., native – who holds the peculiar distinction of being the first professional basketball player in history to hit a four-point shot (instituted as part of the Harlem Globetrotter’s routine in 2011) – passed through Indianapolis recently to speak to area students as part of the team’s C.H.E.E.R. for Character program, and to play against the Globetrotter’s perennial opponents, the Washington Generals.

Grant sat down with Current to talk hoops, and about why he and wife, Carly, chose Fishers to make their home. 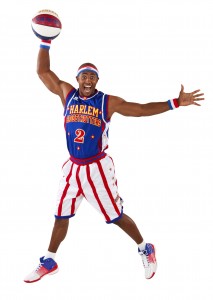 I think the obvious first question is: How does one shoot a four-pointer?

Grant: “We came up with the four-point shot last year. During the last three minutes of each half, an area 35-feet away from the basket on each side of the court activates. It adds a lot of energy and excitement to the game.

(The shot) was tough at first … there were a lot of air balls. We were playing a game down at Disney World when I hit the first one. Now, I can shoot it no problem.”

The Globetrotters are known for their ambassadorship in communities around the world as much as their ball-handling skills. You take time on top of the 270-game season to talk to school children as part of your C.H.E.E.R. for Character program. Where does the emphasis to go above and beyond the game come from?

Grant: “We as Globetrotters take it as our responsibility to go around the community and help these children, because they are the future. If you go way back to when we started in 1926, there weren’t too many African-Americans playing sports. I think it started with us bringing the community together with basketball, and we still enjoy doing that. We embrace being ambassadors of good will.”

You’ve been a Globetrotter for six years. How does one go about getting invited to join the team?

Grant: “Everybody’s story is different. I had dreams and aspirations of playing professional basketball out of college. I ended up signing with the New York Nationals (also known as the Washington Generals), which is the team the Globetrotters play against.

I had no idea how to do anything. I couldn’t spin the ball on my finger. It’s up to the veterans to teach the rookies how to handle the ball.”

How much “globetrotting” do you actually do as part of the team?

Grant: “We play internationally for two months out of the year. Something I didn’t realize is how much the Globetrotters are loved around the world. No matter where we go, we’re the home team. I always wanted to see the Great Wall, and now I’ve been three times.” 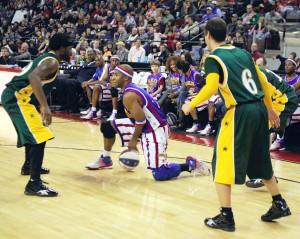 Your wife, Carly, played ball at Pendleton Heights High School, but you’re a New Jersey native. What made Fishers stand out as the place to make your home?

Grant: “Fishers was the perfect location. It’s definitely a great place to raise a family. I lived in six different states growing up, and Fishers is by far my favorite place. It’s not too big, not too small. It’s the best of both worlds.”

And when the two of you play each other … who wins?

Grant: “She’s a great shooter. When we play, it’s her getting my rebound and me getting her ball out of the net.

We’re expecting our first child in August. We don’t know if we’re going to have a boy or girl yet, but either way it will have two great coaches to teach it to shoot.”

Of your six years on the team so far, what sticks with you?

Grant: “We played on an aircraft carrier … probably one thing that sticks out to me was entertaining troops over inIraq. One of the funniest things is, I tell people I love fishing and they seem surprised that a basketball player likes that.

I love what I do. I love my job. I love entertaining people around the world. But when I come home, I love it, too. It’s a win-win both ways.”

Hobbies: “I love bass fishing. When I’m home, I’m either at Geist or down at Morse (Reservoir) bass fishing.”

Quote: “My mom always told me, aim for the moon, because even if I missed, I’d land among the stars.”

Jordan is the managing editor of Current in Fishers