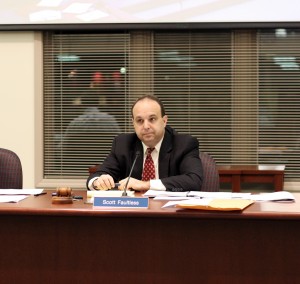 Scott Faultless will serve his 12th consecutive year as president of the Fishers Town Council after a 4-3 vote for his reelection Monday night.

Mike Colby, who served as vice president of the council last year while finishing the remainder of former councilor Charlie White’s term, will continue as vice president in what has traditionally been a two-year role.

“The council, as a whole, has delivered public service to the community that has been nationally recognized by repeated, objective assessments and awards,” said Councilor Stuart Easley, who nominated both Faultless and Colby for reelection. “And Scott Faultless has been the town council president during this exceptional period. His contributions and service merit reelection as president.”

“Fishers is an award-winning community unlike any other,” Faultless said. “I have had the pleasure to work alongside many talented individuals that have collaborated to make the successes possible, and I look forward to another year of accomplishments and progress.”