You are at:Home»Current in Carmel»Carmel Community»Carmel resident gives back with Super Bowl prize 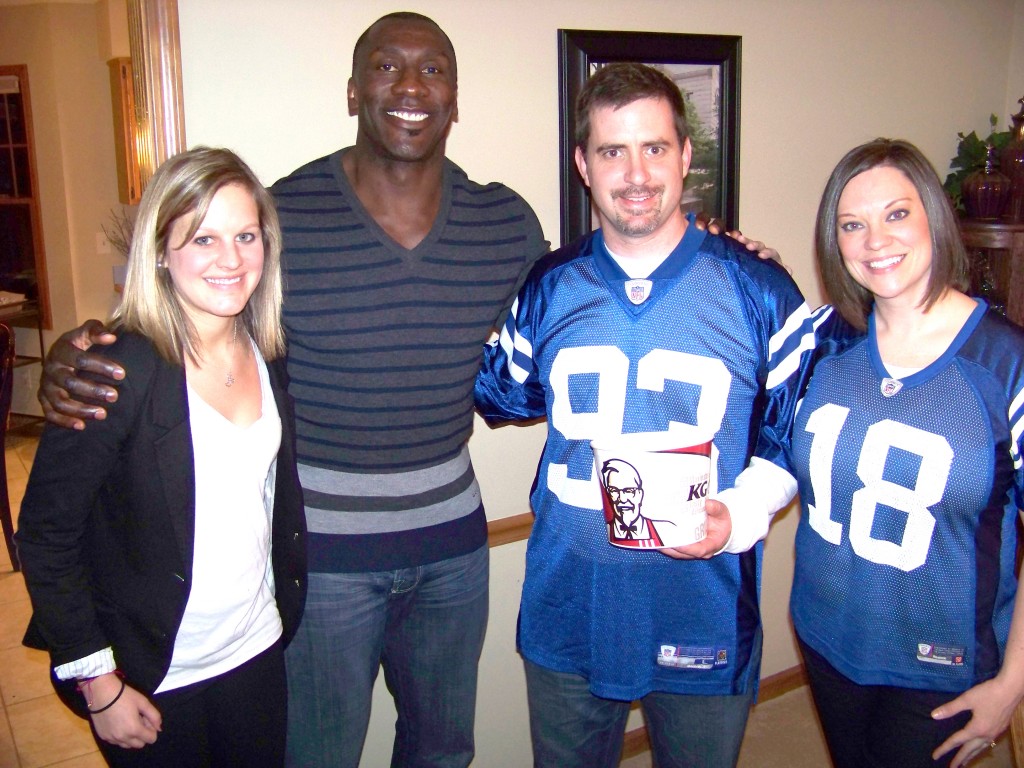 Hall of Fame tight end and TV football analyst Shannon Sharpe was on an Indianapolis radio station a few days before the Super Bowl promoting a national contest in which he would watch Super Bowl XLVI in the winner’s home.

On Feb. 5, Sharpe was watching the big game in the home of Carmel residents, Joel and Julie Markland.

But while the couple cashed in on that portion of the contest’s prize, Joel gave up the $10,000 check that came with it for a good cause. Per the details of the contest, the prize money was to be earmarked for a makeover of the winner’s media room, but Joel donated his winnings to Peyton Manning Children’s Hospital at St.Vincent.

“Ten-thousand dollars would be nice, but there are people who need that more than I do,” Joel said. “And I have already gotten more lessons for myself and for my kids than $10,000 could ever buy.”

He entered the contest by tweeting at Kentucky Fried Chicken’s Twitter handle and explaining, in 140 characters or less, why he wanted Sharpe to watch the game in his home.

“I basically said I would actually want to hold the party in the hospital, and I would donate the money to the hospital,” he said.

The next day, KFC told him he had the winning response, and Joel said he immediately called St.Vincent, as he had yet to clear his idea with the hospital’s staff.

Hosting the party in the hospital wasn’t a possibility, so Joel hosted 25 hospital patients and staff members – and one retired football player – at hishome. He personally invited a frequent patient of the hospital and her family, who said one of the hospital’s biggest needs was rooms decorated and dedicated for girls.

As for his experience with Sharpe, Joel said he was definitely feeling pressured to get his family’s home looking its best for his visit.

“Heckyeah,” he said. “It was amazing how many things you can get done in 48 hours.”

Joel said Sharpe was contractually obligated only to stay through the first half of the game, but he stayed through most of the third quarter, giving Joel some insight into the game.

“He could identify a play before it started,” Joel said. “He’d say, ‘It’s going to be a run up the middle,’ and it was.”

The Carmel resident said he doesn’t want attention focused on his good deed. Instead, he said he donated the money to prompt others to look for ways in which they can give back, too.

“It’s more about the fact people ought to thinking about giving and seizing opportunities when they come,” he said. “It started out that I was excited Shannon Sharpe was going to be at my house. Instead, it turned into a great a night with people and kids I’d never met before.”